It seems every year now about this time I get sucked down the rabbit hole by a vortex of history on a Grail quest to solve a damn-near impossible historical mystery. Last year, my 50-year endeavor to discover my forebears unexpectedly opened a long-locked door, and the vacuum on the other side sucked me through, rapidly gave me as grandparents most of the royalty of Europe, the historic characters of all the latest Viking television epics, and the kings of the Galatians featured in Saint Paul’s epistles. It was entirely unexpected, hugely gratifying, and in retrospect, well worth the long slog to achieve it.

This year’s quest is a bit different. For the last twenty years I’ve worked with a small but dedicated team of folks to preserve the burial place and memory of some of the most significant Americans you’ve never heard of: the Brent family—the first white settlers in Northern Virginia. English gentry who descend from William the Conqueror’s nobles, they came to Maryland in 1638 to escape religious persecution in England, only to have England’s religious and political turmoil follow, and drive them across the river into the wilds of Virginia a decade later. Foremost among them was Giles Brent, whose marriage to Kittamaquand, daughter of the Powhatan chief, made them welcome to settle in 1648 on the western shores of the Potomac. There, he and his sisters cleared land, built the earliest two plantations, and planted tobacco, the one crop all Europe then suddenly craved for its newest addiction. As tobacco growers, they rapidly grew wealthy satisfying that demand, and their relations intermarried with the other English gentry who followed them into Virginia, a who’s-who of leaders of the American Revolution and founders of the United States a century later.

Specifically, I’m now trying to find one of them: the lost grave of Sarah Brent Mason, one of America’s Founding Mothers (we have Founding Fathers, so are not their spouses our Founding Mothers?). Sarah was the second wife and widow of George Mason IV, author of the 1776 Virginia Declaration of Rights, which furnished the first ten amendments to the U.S. Constitution, now collectively termed the U.S. Bill of Rights. Sarah was George’s mate, marrying him at age 50 to become mistress of his substantial household at Gunston Hall plantation, stepmother to his brood of twelve, and de-facto mother to his youngest children. They were man and wife through the latter half of the Revolution, Georges’ years in the Continental Congress drafting the U.S. Constitution, and the remainder of his years to his death in 1792.

Sarah was born in Bermuda in ~1731, eldest child of George Brent of Woodstock, who traveled there to visit his maternal relations and found a bride in Catherine Trimmingham. The Brents returned to Woodstock a few years later to raise tobacco and a family of nine on Woodstock. Sarah was 20 when her mother died, and her father never remarried. Instead, Sarah ran her father’s household for the next 30 years, raising her siblings as if they were her children. Her father died when she was 48, leaving the plantation to her eldest brother Robert, and a house in nearby Dumfries to her, near the home of her sister Jean and husband Richard Graham, a close friend of George Washington and one of the wealthiest merchants in America.

After her husband died, Sarah lived on another twelve years, leaving Gunston Hall for Dumfries, when the plantation passed to her stepson, George Mason V. And here the mystery begins. . . .

As of now there are clues, but no answers.

So how did I get pulled into this mystery?

I said earlier I’ve spent twenty years now working to preserve the Brent Family Cemetery. Lost in a small forest, this little ten-acre patch is one of the oldest cemeteries in Virginia, started perhaps as early as 1670 when Sarah’s second-great grandfather, Captain George Brent, sequentially buried his aunt Margaret, mother Marianna, both of his wives, at least two young daughters, and his brother beside the first house on his new Woodstock plantation. In 1699 at age 60 he joined them. Life wasn’t easy in the fledgling American nation. 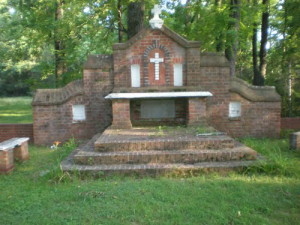 Since then, both time and war have taken a heavy toll. The American Revolution, the War of 1812 and the Civil War were all fought in this part of Virginia. Both British and Yankee commanders committed outrages of war here, burning courthouses, churches and plantation homes. Their troops vandalized graveyards by destroying or stealing the headstones. And in the process all that carnage destroyed many of the records that underpinned the history I’m now trying to stitch back together.

Graves of George Mason and his first wife

To try to build a list of candidates for those graves, I began using my long-honed genealogical skills to build a Brent family tree, and from it identify the Brents and their relations who died in residence at Woodstock. To date, I’ve potentially tripled the size of our cemetery population. And along the way, my labors drew the attention of others. . . .

So when Gunston Hall asked the Catholic Diocese of Arlington if the Diocese knew where Sarah Brent Mason was buried, the Diocese folks were puzzled:

[Ahh! At this point I should point out that Sarah’s Brent family were Catholics, or crypto-Catholics, throughout the time when Virginia had a state religion. Yes! You read that right: the thirteen colonies once had one official state religion, and it was a prosecutable offense to worship with any faith other than Church of England, particularly as a Roman Catholic. Among other prohibitions, Catholics could not hold public office or inherit property, and had to pay the Church of England tithes (that is, church/state taxes). The Church of England actually collected the colony’s taxes! Baptists didn’t fare much better, and Jews, God help them! For this pernicious outrage, you can thank Henry VIII, Oliver Cromwell, and the other English monarchs who insisted on ruling their subjects’ religion as well as their politics, wearing both crowns as head of church and state.]

So if you are fond of your American freedom to worship as you wish or not to worship at all—I hope so, I am—You should know and thank these very same Catholic Brents who first won that right for you. And their kin, who ensured that right was enshrined in the U.S. Constitution! Some now want to destroy that right by banning all religions but their own from public discourse, but that’s a story for another time . . .

Diocese: Wasn’t she buried where everyone thinks: beside her husband in the Mason cemetery?

Gunston Hall: There is no record or monument to show she’s there. How about the Brent Cemetery?

Diocese: Same story — we have no record or monument. But we do know someone . . .

. . . and that’s when the giant sucking sound began! Schluummppp! And suddenly I found myself saddled with a new quest:

Since then the list has grown. Besides Gunston Hall and the Diocese, the Virginia counties of Stafford, Prince William, and Fairfax all have a historic basis to claim the lady, and are interested in finding her. Maryland, the two-faced neighboring state who once persecuted the Brents right out of their borders, proudly lay claim to the Brents today. And the District of Columbia, Georgetown University, and the nearby George Mason University each have reason to think of the lady as theirs. But none of them know where to find her. I know, because I’ve asked.

So the quest continues: gathering scattered documents, combing through them for clues, piecing events into a timeline, and pinning the locations on maps. I’ve scanned the interment records of dozens of cemeteries, and read every relevant document I can find online. My working theory is that if I find sister Jean, who is also missing, I will find Sarah. Yesterday I followed Jean to a funeral in Washington, DC in 1817, but have yet to find her grave. And yesterday I followed Sarah from Gunston Hall to Dumfries, and then to Washington, DC and back to Dumfries again.

It now appears Sarah Mason died 2 Dec 1805 in Dumfries, and that her 1794 will survives, of all places, in the archives of Gunston Hall. I have helpful minions in a half-dozen organizations locating other records that may help, and press on in hope that one will furnish the vital clue at last.

Will I find her? I cannot say. Will I quit looking? Nope! Not until every clue is exhausted and every hope dashed. And with every cemetery that refuses to produce her, I know where she is not. Better still, I have the two I began with: the Mason Family Cemetery with its 60 anonymous souls, and the Brent Cemetery with perhaps dozens more. Both of those have suddenly (again!) become the two most logical alternatives, and of these the Brent Cemetery is the more likely: Sarah lived there fifty years; most of her kin rest there; and only George Mason, who loved his first wife more, would pull her toward Gunston Hall.

I know she’s out there somewhere, waiting for me, so I must keep looking. It’s not nice to keep a lady waiting.