It’s done! March To Nicaea is out!

Well, I missed Black Friday. And I missed Christmas. But I made New Years.

And now both the softcover print edition and the Kindle ebook edition of March To Nicaea are available for purchase on Amazon. The epub edition should be available this week in other fine online bookstores.

It took too long — much too long — to publish. Coping with fifty-plus illustrations and maps made revising the text the easy part. Managing to keep those images high resolution throughout the final formatting and pre-publication reviews required many restructurings and resubmittals. I think I rebuilt the book more than a dozen times.

And through it all, I have discovered this — Vetter’s First Law of Publishing:

Everything is harder than it looks, and takes longer than it should. Plan on it.

But that is behind us now; and I hope you enjoy both this book and the entire series.

March To Nicaea is the third volume in the five-book Siege Master series — in truth, the third episode in a five-book novel.

The series began with Call to Crusade, in which we meet Godric MacEuan as a boy. He relates the events of his privileged early life amid the royal family of King Malcolm III of Scotland, his slavery to a blacksmith, success in regaining his freedom and birthright by his own hand, participation as a squire in the eventful 1086 pilgrimage by Count Robert of Flanders to Jerusalem that ultimately triggers the First Crusade. Godric’s actions win two important battles for the Byzantine empire, earning him acclaim, fortune, knighthood, and expertise with siege technology that establishes his career as a siege master.

In the second book, The Siege Master’s Song, Godric relates how he served King Malcolm as a lawman — a sheriff-at-large whose authority spanned all Scotland. He tell us of his efforts learning to build and utilize the siege engines he first encountered in Constantinople, and of the six sieges in which he uses those engines to defeat his king’s enemies, until tragedy changes the direction of his life once again.

In March To Nicaea Godric answers Pope Urban’s call to defend Christianity from a relentless Islamic invasion already four centuries old, rejoining his earlier comrades on a great military campaign to push back the invaders and reclaim Jerusalem as Christ’s capital on Earth. But the road to Jerusalem is blocked by the great fortress city of Nicaea, capital of Sultan Kilij Arslan of the Seljuq Turks, whose army occupies Northern Anatolia, as Turkey was then called. To open the road to Jerusalem, Nicaea must be taken first. 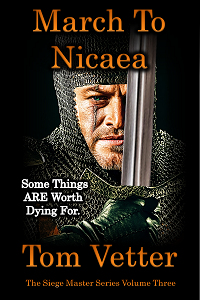 But how? In Europe, castles are still fortified compounds inside wooden palisades, conquerable by fire and battering ram. But Nicaea and the other great cities of the Middle East are strongly built of stone, inside double walls studded with towers and ringed by great ditches. The Crusaders have nothing to defeat them.

Or do they? For Godric has already seen these cities, studied their defenses, and considered how they might be taken. And to Nicaea he brings two invaluable weapons. The first is a new siege engine powerful enough to conquer stone fortresses — the counterweight trebuchet. The second is unshakable faith that God will give them victory.

Why? Because Deus lo vult! God wills it!

If the series interests you, the embedded links will take you to the books on Amazon.