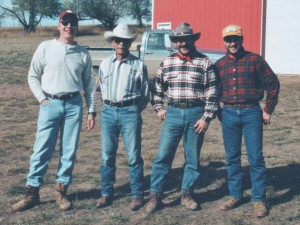 I lost my dad in seven years ago when he lost a hard fight with cancer.

Not only was it tough to lose the man who most helped me grow to manhood, but with his passing I suddenly became the family patriarch, and many of the leadership, counseling and decision-making duties he had always performed for the family suddenly became mine.

His shoes were hard to fill, and I’m still trying to grow into them.

Brother John, Dad, me, and brother Lee on a hunting trip in Wyoming

At the point he passed, all my books were still unwritten, still years ahead in my future. I know he would have enjoyed reading them had he the chance. Indeed, it was his ability to tell a story— sometimes as many as three inter-related tales at the same time—starting one, another and a third, relating portions of each as part of another, and then neatly wrapping up each without losing track or failing to end any of them—that gave me both the inclination and some of the skills I’d need to write.

Dad was a Navy man in WWII, and served four years as an aviation electrician’s mate in the Pacific coming home to finish college as an aeronautical engineer. He taught me Navy ways from my earliest days, and steered me toward the Navy when the Vietnam War made military service a near-certainty for me. He would have preferred to see me fly—flight was always his passion as well as his career—but when I was finally able to give him a tour of my second submarine, he came to understand why the undersea was mine.

He never got to read my latest book, 30,000 Leagues Undersea: True Tales of a Submariner and Deep Submergence Pilot. He shows up in it in a number of places—the dedication, and several of its many stories. He would have recognized a number of its instances, as well as some of the locales and characters, since he lived some of those events along with me. But I think he would also have reacted as my mother did: “I never realized how many times I nearly lost you, nor how you managed to get into and out of so many tough predicaments.”

Well, I can answer that in a word: Dad.

Resourceful: Dad was always building something we needed, and I learned tools, yard work, carpentry, construction, electrical work, plumbing and general engineering at his elbow.

Courageous: On a wilderness canoe trip, my father once faced down and defeated the 500-pound black bear who tried to commandeer breakfast using … a spatula!

Upstanding: Through almost 60 years of marriage, five kids, and a number of career successes and setbacks, my dad ALWAYS did the right thing. He kept his word, honored his commitments, paid his way, earned his daily bread and ours with honest work, and taught his kids to do the same. He didn’t cheat, cut corners, or foist off on others what was his to do. He went out owing no one, and he left his wife and kids a legacy of freedom, health, financial independence and happiness. No one could have done better.

I was lucky to have him. And I hope you feel the same way about your dad.

I don’t have a dad anymore, nor grandfathers. I’m also not a dad—that luck passed me by, though these days I’m old enough to be someone’s granddad. But dads are important to the growth and well-being of every kid, so if you still have yours, don’t forget to honor them!

And if you think your dad is the kind of man who would like to read of true adventures in unusual places, you can find 30,000 Leagues Undersea in print here:   http://www.tomvetterbooks.com/bookstore/.

I still have a few copies of the Deluxe Collector’s First Edition—and the special TRIESTE challenge coin that comes with it—as well as the softcover editions. Whatever you order, I’ll get to you, or him, pronto.

If he’d prefer the book in e-book form, you can give it to him for about the same price as a good greeting card:

You can find it for Kindle here: 30,000 Leagues Undersea

And if you can’t afford a present, give Dad one on me! I have free e-books he’s sure to enjoy.

Download one or two FREE with these links. Pick something he’d like, and send it along with a nice note:

Link: Be Careful What you Wish For, for Kindle

Link: Be Careful What you Wish For, for Nook/other e-reader

I offer these e-books so folks can give me a try for FREE and decide if I write what you like. There’s an opt-in, but you can always unsubscribe if you decide I’m not your guy.

Above all, be sure to give him my best regards. And I wish you both a Happy Father’s Day!

P.S.: If YOU read and enjoyed 30,000 Leagues, I’d be ever so grateful if you used those links above to rate and/or review the book on one or more of those websites, or on Goodreads here: http://www.goodreads.com/book/show/25336378-30-000-leagues-undersea

« Readers are praising 30,000 Leagues Undersea. But Amazon is making it a Classic!
A Visit to the Principal »