Those of you who have been reading my posts will know that I have been searching and researching to locate the lost grave of American Founding Mother Sarah Brent Mason. More recently I have also been writing about it, and now have two-thirds of a book written about her, her historic family and this very convoluted Grail quest of mine.

In the process it appears I have also accomplished a worthwhile feat of “accidental archaeology”.

And just what the hell is “accidental archaeology”, you ask? Good question! It is the discovery of a historically important site made without intending to. And I may be its accidental inventor.

Dr. Henry “Indiana” Jones, PhD has told us, “90% of all archaeology is done in the library.” To that I can say that I think the good professor is correct but out-of-date, because it turns out you can also do a helluva lot of archaeology online. 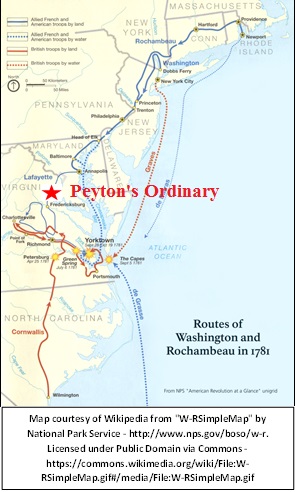 Now folks of advanced years like me all know the American Revolutionary War story in which the Generals Washington and Rochambeau marched their combined armies south from Rhode Island in the summer of 1781 to trap General Cornwallis in Yorktown and defeat him to win the war. And we Virginians all know they marched south along America’s first highway, Route One, to get there—and north on it again to return to New York afterward.

Ever give any thought to where they encamped along the way? I’m guessing, “No.” I know I hadn’t—until I recently learned that General Rochambeau had had his military engineers draw a series of maps of their campsites along the line of march, that these have survived in the Library of Congress, and that one map showed both the Woodstock plantation and Brent Cemetery I was researching.

Sure enough—a web search found Rochambeau’s maps online thanks to the Library of Congress, and you can view them here:

Mapmaking is but one important skill of military engineers, along with scouting, road and bridge-building, and blowing stuff up. But it is vitally important to military operations to know where you are, where you are going, where your enemy is, and what kind of terrain is around you. As one who was once both a submarine navigator and a seafloor cartographer, I have a great deal of respect for good charts, and know how hard it is to do cartography well. So I could see these French engineers were very skilled, and their maps could tell me much.

It took a little effort to make a screen capture of the image, convert it to a JPEG, and then overlay it on the relevant location in Google Earth. But by making the image semi-transparent and then rescaling it to match the corresponding geography, I got this: 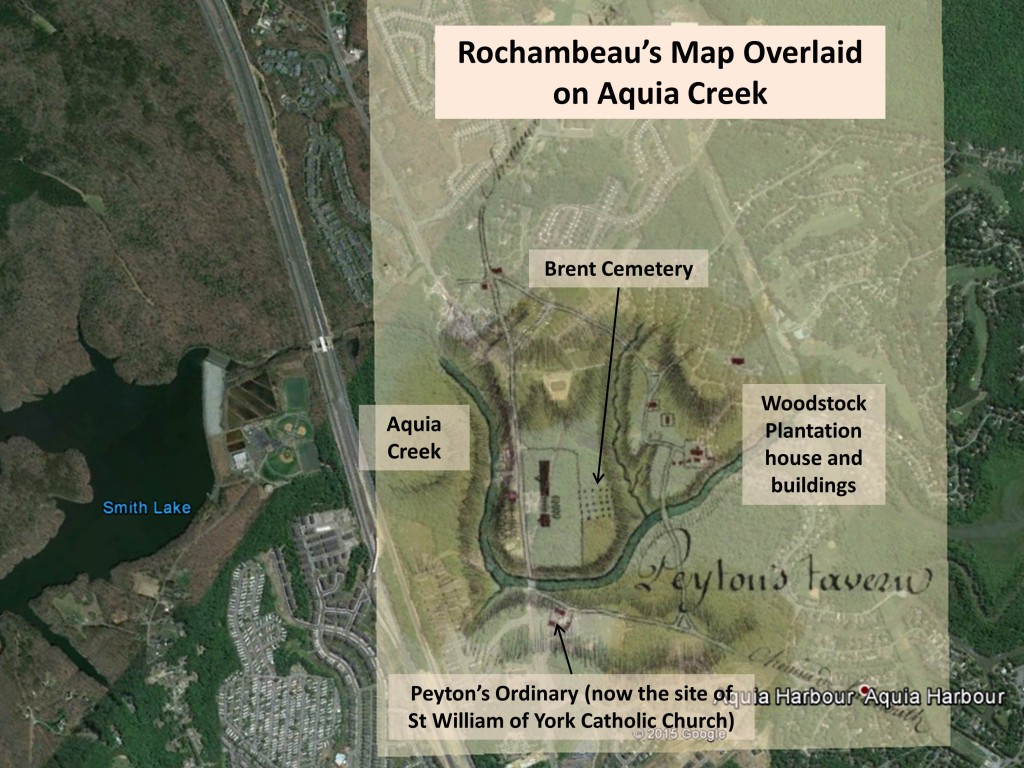 What you are looking at is Aquia Creek in Stafford, Virginia—as it was in 1781 overlaid atop the same region today, with the creek contours, road location, and ford/bridge all aligned with a remarkably good fit. I know the ground there well, from having walked it and seen it repeatedly over twenty years, so when I first saw the map I knew what I was looking at. Moreover, my Knights of Columbus assembly meets regularly at St. William of York Church, so I’ve walked that ground, and was struck by the fact that “Peyton’s Tavern” as shown on the map stood just where the church and school are there now.

What I did not know at that moment was that “Peyton’s Tavern”—or “Peyton’s Ordinary” as it was more properly called then—has been lost since the Civil War, and that I had just rediscovered it.

In the 18th century an “ordinary” was a combination of tavern and inn, offering meals, liquid refreshment, and overnight accommodations to travelers, and meals, entertainments  and venues for social events to the local residents. They served then as hotels and restaurants do today. And given its location, Peyton’s establishment was an important spot.

About it my good friend and fellow author/historian, Jerrilynn Eby MacGregor, said this:

“There is an historical marker for Peyton’s Ordinary on Route 1 about a mile south from the juncture of Route 1 and Garrisonville Road. Historians believe it was not at that location, however, but think it was probably on a ridge by Aquia Church, as there is a spring there, a necessity for an ordinary.

“Peyton’s Ordinary was quite busy from at least the 1760s until the mid-nineteenth century. According to county court records, Yelverton Peyton was granted a license to keep an ordinary in 1768.  Peyton was a Stafford justice and a well-respected gentleman.

“On March 6, 1769, George Washington dined at Peyton’s Ordinary. He also spent the night there on October 31, 1769, on his way to the House of Burgesses and again on September 14, 1772.  General Rochambeau’s army, marching north from Williamsburg camped there in 1782.”

(Above information from Jerrilynn Eby’s book, They call Stafford Home.)

Now Ms. Eby MacGregor is a recognized expert in the history of Stafford and its land records, so her knowledge in this case is considerable, and her opinions weighty. And we have become friends through my consultation with her on the Brents and Stafford County. So when I asked her about Peyton’s Ordinary, she mentioned Rochambeau’s map, so we compared notes on its site. She thought it might have been in the new development across Route One from St William of York. When I said my overlay put it on the site of St William of York, she said that made complete sense. She agreed that below Aquia ford the road turned southeast to enter the now-extinct town of Aquia (today it is the Aquia Harbour Phase One housing development). And she concluded that a St. William location provided a much better solution than any other to date. Indeed, close scrutiny of Google Earth images of St William of York reveals traces of the old road beside it, just where the map shows.

When I asked Jerrilynn if George Brent’s neighbor, Yelverton Peyton, had once owned the St. William of York site—as he would have to have done if the Ordinary was ever there—she confirmed that it had been his.

She told me the early settlers tended to go up the creeks as far as it was navigable and build their first (small) dwelling there. Then, after the mosquitoes drove them mad, they built a second dwelling on cleared land in a more pleasant location farther from the creek. Just so with Woodstock plantation. And the Route One ford shown on the map must have been at a place shallow enough for horses and wagons to cross, but which also made Aquia Creek too shallow to navigate further upstream—another confirmation the map is right.

So apparently I can now add “accidental archaeologist” to my very curious curriculum vitae, and “forensic cartographer” to my resume. Yeah — as if I needed yet another job. 🙂

« My Latest Grail Quest . . .
A Progress Report on the Siege Master Series »