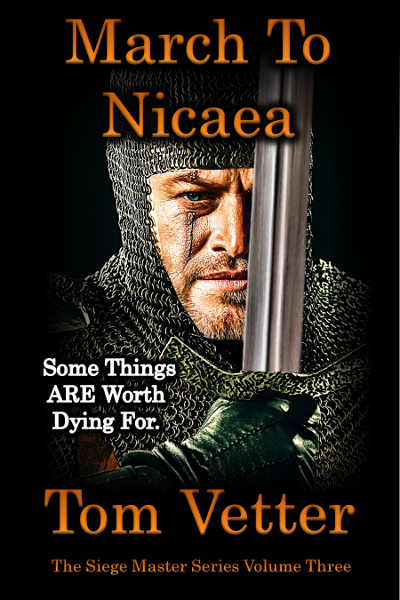 Some Things ARE Worth Dying For…

In 1095A.D. Byzantine Emperor Alexios Komnenos begs Pope Urban II for Frankish knights to rescue the last bit of his Christian empire from a relentless Islamic invasion already 400 years old. In answer, Urban issues a call to the faithful to save Christendom. Many thousands respond, and their campaign to recover Jerusalem will become the First Crusade.

Scottish Baron Godric MacEuan joins their ranks, and he is sorely needed. A decade earlier he scouted the Holy Land. Now he is highly-sought as a siege master. But Europe’s castles are wooden, easily defeated by fire and battering rams. Holy Land cities are fortresses of stone, and the Crusaders have nothing that can conquer them.

But Godric brings them tools they need most: expertise to defeat the toughest obstacles; the most powerful siege machine ever developed; and unshakable faith that God wills their victory. Nicaea blocks the road to Jerusalem. It must be taken. The time has come to March to Nicaea.

THIRD VOLUME IN THE SIEGE MASTER SERIES, THE EPIC STORY OF THE FIRST CRUSADE TOLD AS NEVER BEFORE: AS THE FIRST-HAND RECOLLECTIONS OF A SCOTTISH KNIGHT WHO BATTLES TURKS, TURNCOATS, STARVATION, AND DEATH ITSELF TO WIN A CRUSADE AND RECOVER HOLY JERUSALEM.

The book is fiction … but the story is true.

Buy the book at one of these fine online booksellers!

And thanks for being My Reader!